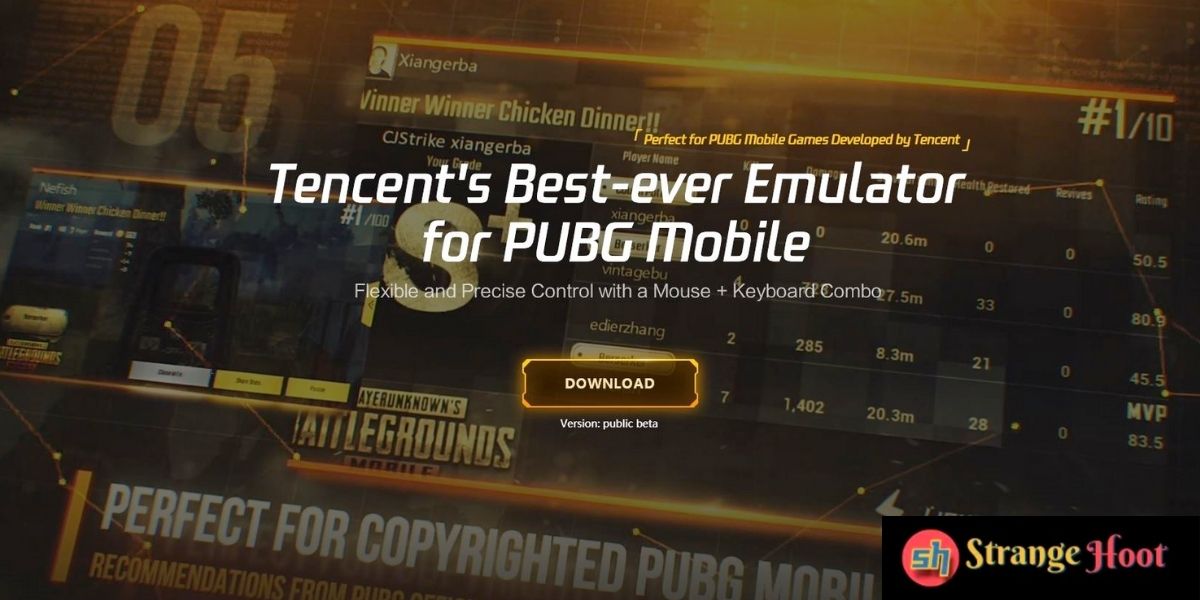 One of the primary reasons for the increase in popularity of mobile gaming is the fact that the vast majority of them are completely free. Although they do so at the price of ads or in-game purchases, the true core of the game appears to have been preserved to some extent.

For example, the game PUBG. Playerunknown’s Battlegrounds was first released on PC and consoles, but the free mobile version has managed to attract a larger audience as well as generate significant income.

The good news is that you can use an emulator to play nearly any Android game, including PUBG Mobile, directly on your PC without any difficulty. An Android device simulator is a straightforward piece of software that allows you to replicate an Android smartphone on your computer.

Tencent Gaming Buddy is an Android emulator that is particularly popular among players of the game PUBG. On top of that, it allows you to play a wide range of additional Android games on your Windows PC.

This Android emulator allows you to enhance your overall gaming experience by allowing you to play games such as PUBG on a widescreen.

Because of the current restriction on Chinese publishers in India, there is a good probability that you will not be able to download the game if you live in the nation, according to the official website.

Several of the emulators listed below provide the capability for loading APK files from the sideloading directory. However, if you do decide to go that route, make certain that you obtain the program from a reputable third-party app store before proceeding.

It’s also worth noting that, while PUBG Mobile does enable you to play with emulators, you will only be able to play with other players who are using the same way to play the game as you.

Tencent Gaming Buddy is the official emulator for PUBG Mobile, and it is provided by the game’s producers. Also, if you want to play PUBG Mobile on your PC, this is the most reliable and secure method to do it.

This emulator, in addition to being designed to run the battle royale game, also supports other titles from the Tencent gaming catalog.

Install the installation file on your computer after you have downloaded it. Open the emulator to begin downloading the files required to run PUBG Mobile on your device.

If you do not want the game to be installed in your default directory, you will be able to choose a custom path during the installation process. Once the game has been downloaded and installed, you can begin playing immediately using your keyboard and mouse.

There are additional possibilities for customizing the layout to meet your specific requirements.

In addition to having the Google Play Store pre-installed, the phone has an in-built app store. There is also the option to just drag and drop APK files from your computer to the emulator to have them installed immediately.

One may choose the display resolution, as well as the amount of RAM, CPU, and storage that is allocated. There are advertisements in the free version of Bluestacks, but the premium version eliminates all of the distractions.

Log into your Google Account by starting the emulator and inputting your login information into the appropriate fields. Towards the upper right corner of the screen, there will be a search option for applications. Once it is completed, you can begin playing games on your computer.

LD Player, a relatively new PUBG Mobile emulator for Windows, is now available for download. Just like Bluestacks, this one also allows you to customize the display resolution and resource allocation to your liking.

One of the most appealing aspects of this emulator is the ease with which Android shortcuts can be accessed. It is capable of running the vast majority of your most recent and popular Android smartphone games straight on your PC and taking full advantage of your PC’s hardware capabilities.

Open the emulator and let it fully load all of the materials it needs.

Another highly recommended Android emulator is NOX Player, which can be downloaded for both Windows and Mac. It was created particularly for gamers who wished to play their smartphone games on a PC for the first time.

Because it allows you to configure your keyboard controls manually, it is a suitable emulator for playing PUBG Mobile, and it has already been tuned for the game.

You also get functionality for capturing screenshots and recording screen videos, as well as the ability to sideload APK files if you don’t want to utilize the Google Play Store for whatever reason. Other alternatives for allocating system memory and CPU resources are available as well.

Start by running the installation file; when the emulator has been successfully installed, you will need to connect to the Play Store using your Google account. Once you’ve found and downloaded PUBG Mobile from the Google Play Store, you’ll need to download it on the virtual machine.

Another popular Android emulator, Memu is accessible for Windows devices such as desktops, laptops, 2-in-1 devices, and tablets. It is available for both Android and iOS devices.

According to the developers, this emulator has the highest level of compatibility, so you can use it even if your computer is ancient and has low-end hardware. The play offers the best performance as well as the widest range of compatibility.

Additionally, you will receive support for popular titles such as PUBG Mobile, Call of Duty Mobile, Clash of Clans (including Free Fire), Clash Royale (including Clash Royale), Brawl Stars, and Arena of Valor, among others.

It also allows you to create, clone, and delete Android systems with a single click, allowing you to run several Android instances at the same time.

Myself Roshni Arora, a 20 years old self-independent girl, born and raised in Uttar Pradesh, India. I am passionate about writing and keen to gain more and more knowledge by working in this field.